So, I decided to make a meringue frosting for a cake.  I was scared shitless about making this frosting  because I was trying to have an end result of suspiro (Dominican cake frosting, yes I am half Dominican).  This deals with making a syrup out of boiling water and sugar.  Now a couple of years ago, my sis and I attempted to do this.  We ended up with burnt sugar that came out looking like melted plastic!!!! Then the second try, the sugar didn't dissolve all the way so you were able to taste the crunch of sugar in the frosting.  Total Fail.

Fast forward to yesterday, I attempted again by myself.  I was bored and in the baking mood. I made the frosting (and may I add that my syrup came out perfect!).  The frosting was good besides not being too fluffy.  I was happy with it though.  BUT, I made a ton... the recipe I used must have been used to frost a 3 tier cake because I had a huge bowl!  So today I decided to make meringue cookies out of the leftover.. well, FAIL.

This is how they turned out:

I guess since it wasn't fluffy to begin with, it was hard to make the peak on them.  They ended up flattening out as I was piping them out... then they started to spread in the oven.  I was on the phone with my sister and was laughing telling her my meringue cookies look like mini pancakes!!!

But being optimistic, I was like "well, at least I was able to salvage some of the frosting and make cookies."  Then I go to take them off the foil.  Now before you go yelling at me, I knew I should have used wax paper, but I didn't have any.  The next best thing I had was NON STICK Aluminium foil.  I figured since it was non-stick, it shouldn't be a problem.  WRONG....it stuck, soooo bad that I had to throw the whole thing out.

HAHAHHAHA... my sister was cracking up on the phone.

So yeah, I am not going to bother making these ever again.  I'll leave it to the professionals.
As for tonight, I have hung up my Martha Stewart hat. 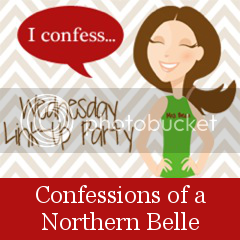 I have this happen to me before...something you thought would be easy utterly sucks to do!

Omg meringue scares me...everything about it from the spelling to the way you make it.

Way to go for trying it out though! Thanks for linking up!

I can't even make brownies out of a box... I'm that bad of a baker. My oven hates my guts!

If those were gluten free, I would eat them!

If those were gluten free, I would eat them!