What What, Empanada time!

I make homemade empanadas (because I'm awesome like that).  But, they are a lot of work when making them, especially the sealing of the darn empanada.  I made the mistake mentioned to the hubs one day that I would make them every day if he found something that will seal the empanada with one touch and cut my prepping time by 70%.  (Disclaimer: I did not think something like this was created, hence why I said I would make them everyday.)  What did the hubs do?  Two seconds later he whipped out his blackberry and went to his eBay app and found a glorious empanada invention made just for empanadas and bought it right then and there.  Amazing how technology works these days.   A few days later, the glorious empanada inventions arrived.  Did I make the empanadas the day after? No.  Week after? No. Month after? No.  Which I will hold my ground by saying that I would probably kill us with fat clogging our arteries if I actually made them everyday so whatever.

But yesterday I decided to make them.  And the invention is the most freaking awesome thing ever created!  So, I thought I would share with you all my empanada cooking extravaganza.  And guess what?  I'll also share the recipe too!  Now, I don't do that whole one teaspoon here of this and cup of that... so, it's called just eyeballing it and seasoning it to your liking.  OK, so here it goes people.  Save this recipe as "Mrs. Newlywed Giggle's Awesome Empanada Recipe That Will Rock Your Husband's Tummy"  Got it?  Good.  Let's begin.

"Mrs. Newlywed Giggle's Awesome Empanada Recipe That Will Rock Your Husband's Tummy"
FILLING
You can use any kind of ground meat (turkey, chicken, beef) I use beef because it's awesome and I love it.
Season the meat to your liking. (I use some Adobo, low sodium; garlic powder and some oregano) Eyeball it people.  It doesn't have to be down to a science.
Brown the meat in a skillet.  I pour in a small can of tomato sauce and let it simmer for another 2 minutes after the meat is browned.  You can also add some green olives.  I don't because the hubs has a major "yuck" factor to them.

PASTRY
I buy the "discos" as they are called (which are also round pastry dough circles that you can find in the freezer that some people use for apple turnovers).  I like to buy the Goya Discos which work the best. Most IMPORTANT step -> DEFROST the discos entirely so they are doughy feeling.

PREP
Take out the glorious empanada invention.  If you don't have one of these, you simply place a spoonful of filling in the middle of the pastry.  Fold it over and use a fork to go around the edges and press down firmly to seal both sides together.  Photos to help with visual: 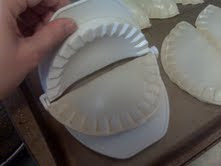 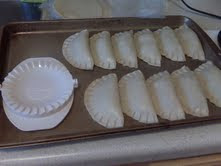 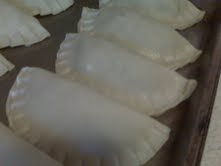 That's what they should like when prepped.  The ridges you see above would be the same with the fork.  You have to make sure they are sealed together good because the last thing you want is for it to bust open in the deep fryer and the filling spill out.  That would be a waste of a perfectly good empanada.
If you have a deep fryer, drop these babies in until golden brown.  Set on a paper towel to degrease and enjoy! 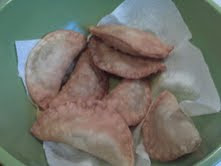 I promise you that your husband will bow down to you after you make these for him.  But WARNING, people are going to fall in love with it so the bad thing is that they will want you to make these all the time.  I warned you so don't come back yelling at me.  Good.
Happy Hump Day!

Empanada queen... that's what my husband's best friends call me. hahaha. so true though, after the first time they tried them, they keep asking for more! I've even had "empanada girls night" where I made 4 different kinds....shredded chicken, original beef, pizza and bbQ chicken. I swear anything in them tastes good. I believe they may be more addicting than crack. ;o)

I am SO glad I stopped by. The hubs LOVES empanadas!! I am going to have to try this!! Stopping by from Friday Follow. Cute blog. Looking forward to seeing more fun stuff ;) Oh, and now I am a follower too!