Today, both Mr. Newlywed Giggle and I had off. We decided to venture outside for a while. Our first stop was of Best Buy. Mr. Newlywed Giggle is a huge fan of this store and he stopped in to pick up something. From there we decided to eat at a buffet place, but long and behold as we pulled in, we noticed that the buffet place had closed! So, we turned around continued on our way. I made no comment about where to eat, I was just kind of in my own little world in the car. Mr. Newlywed Giggle took a u-turn from the highway and I then realized where we were going to "attempt" to get some grub. Recently, a Sonic has opened up near our town and I have never been there and it's been the biggest event our area has had! So bad that Sonic has had to turn people away from eating there of how packed it was. We were one of those unfortunate souls. So, then we were off to find something else. Mr. Newlywed Giggle remembered of a new Sushi Hibachi buffet place named Mikado. This place was really nice when we walked in and we literally were their first customers for dinner as they opened up for dinner at 5 and we were there at 5:10. I must say the place was great, service was great, food was VERY good. Being that it was our first time there, we were offered an Aloha cocktail for FREE! They brought over a whole pitcher for us. But do you want to know the best part? As we walked out, they had a bowl filled with M&M's. That made me very happy! I highly recommend this place if you're in the area. You won't be disappointed. 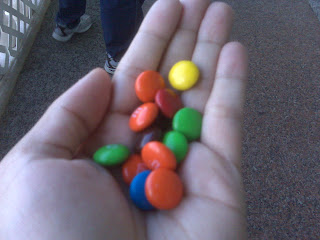 After we ate some dinner we realized we missed the movie so then decided to go mini golfing. Hubby beat me both times we played. But I have to say that I didn't do horrible. Only a couple of points away from him. All in all, it was a nice relaxing day.

Ha Ha I hear you about the Sonic, we have tried to go to BOTH of the new locations, and it is the same, poorly planned, over-crowded mess at both places. Actually tried one last time last night at 10pm. Seriously, 10pm on a Monday and you still cannot get in! I have never seen this happen at any other Sonic ever - only in northern NJ. Never again! I'll stick to going to the one down the shore ;)