So, after a burst of motivation (finding out that I lost 8 pounds the last time I weighed myself in the beginning of December) I decided to bring back to life our Wii Fit which has been sitting in our closet since we moved to the new apartment this past October. 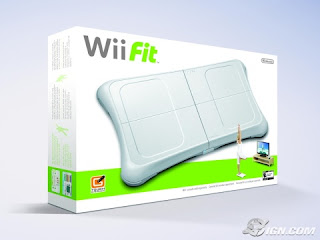 Now, I have not worked out since the beginning of December, but have been watching my portions for lunch and dinner time and trying to eat less junk and healthier.  I also drink A LOT of water, especially at work which makes me wish that I had a toilet right next to me.  So, with this burst of motivation I whipped out the Wii Fit and am determined to be healthier.  Notice I said healthier and not skinny.  It's about being healthy and strong, not wishing I was a size 4 when I know my body is not made out to be that size. So I put on some workout clothes, Wii Fit socks and pulled the hair up.  It's been a long time since I had to stretch my leg out so darn far!  Those strengthening exercises KICKED my ass!  Like seriously, who wants to put their leg pass their hip to touch their head?  Not I!  It seemed I have gotten a bit  better with my balance than the last time I used the Wii Fit... the little wii symbol thingy told me so.  Then I started doing the aerobics which I love! 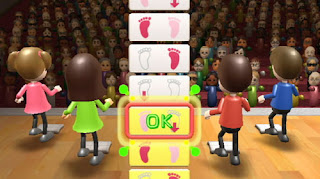 I love doing the stepping aerobics!  But, I do on occasion almost fall on my ass when I don't step far enough from the balance board, but I haven't fallen YET, so I'm happy about that.

Because I did so darn much in aerobics, I opened up boxing!  I got excited and starting boxing away. 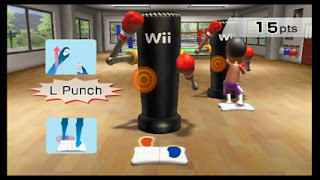 Now with the Wii Fit, you get ranked along with other players who have participated in the exercises.   Makes it even more fun because who doesn't want their name to be 1st on the ranking list?  Me, I want my name first.  So, when I finished the first round of boxing, I realized that the hubby had first place.  His score was 308.  My first score was 218.  I turned around and looked at him and with a determined look on my face said "Oh no, I have to beat you.  I'm doing this again.".  So I did.  The second time around I got a score of 286.  I stopped, more because I couldn't feel my arms and they hurt like a bitch.  But no worries, it's the weekend so I'm ready to kick some boxing ass and beat my hubby's score.  Hopefully he doesn't sneak in and make it even higher!
Anyone have a Wii Fit?  What do you think?

Ive heard its so great! I should try that!

I want this SO BAD! looks so awesome.