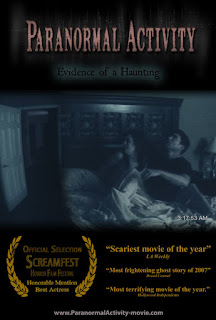 Have any of you seen the movie Paranormal Activity?
By Kenya at 3:26 PM

That is hilarious about your sister! Haven't seen the movie tho... im a big baby when it comes to the scary stuff too!

Oh my goodness, that is so funny!

hahaha havent seen it yet but maybe tonight bc of this post!!!

I haven't seen that movie yet BC IM TOO SCARED!

I can relate! It's been a while since I've seen a good movie to get my heart racing. It was even better to watch it on opening night.
However, during the final scene, I was so scared that I closed my eyes. What happened when she threw the boyfriend into the camera and she bent down to snif him? Did she turn into a demon when she looked into the camera??

@RenRexx, I don't want to spoil the movie for others, but I saw one of the alternate endings which is not the same as you are talking about above. So, I would know. :)